Downtown Albany is the hub for shopping, culture, residential, dining, and entertainment for Southwest Georgia.  Plan the perfect trip to Albany by visiting one or more of the great attractions that Downtown Albany has to offer. 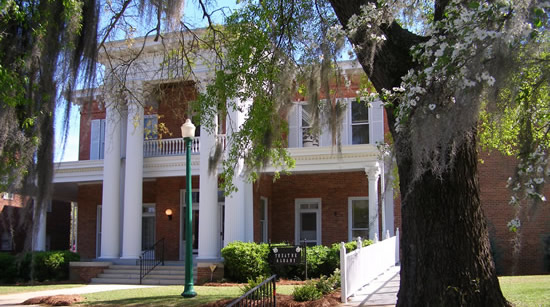 Among the pecan groves and cotton fields of southwest Georgia, live theatre flourishes under the banner of Theatre Albany.  This award-winning organization has offered outstanding performances since its inception in 1932.  Theatre Albany is the oldest and one of the most highly regarded cultural organizations in the city of Albany.

After more than 30 years occupying several downtown sites, Theatre Albany acquired the home of Captain John A. Davis in 1964 for its permanent residence.  This remarkable white columned antebellum treasure adapted well to its new role and, in 1980, it earned designation on the National Register of Historic Places. Theatre Albany produces a diverse and wide-ranging bill of fare, including popular Broadway plays and musicals, classic dramas, contemporary plays, and even original works.  The theatre is celebrating its 80th year as a source of entertainment for the entire Southwest Georgia region.